Now Shopping in USD Switch to Shop in CDN
Navigation 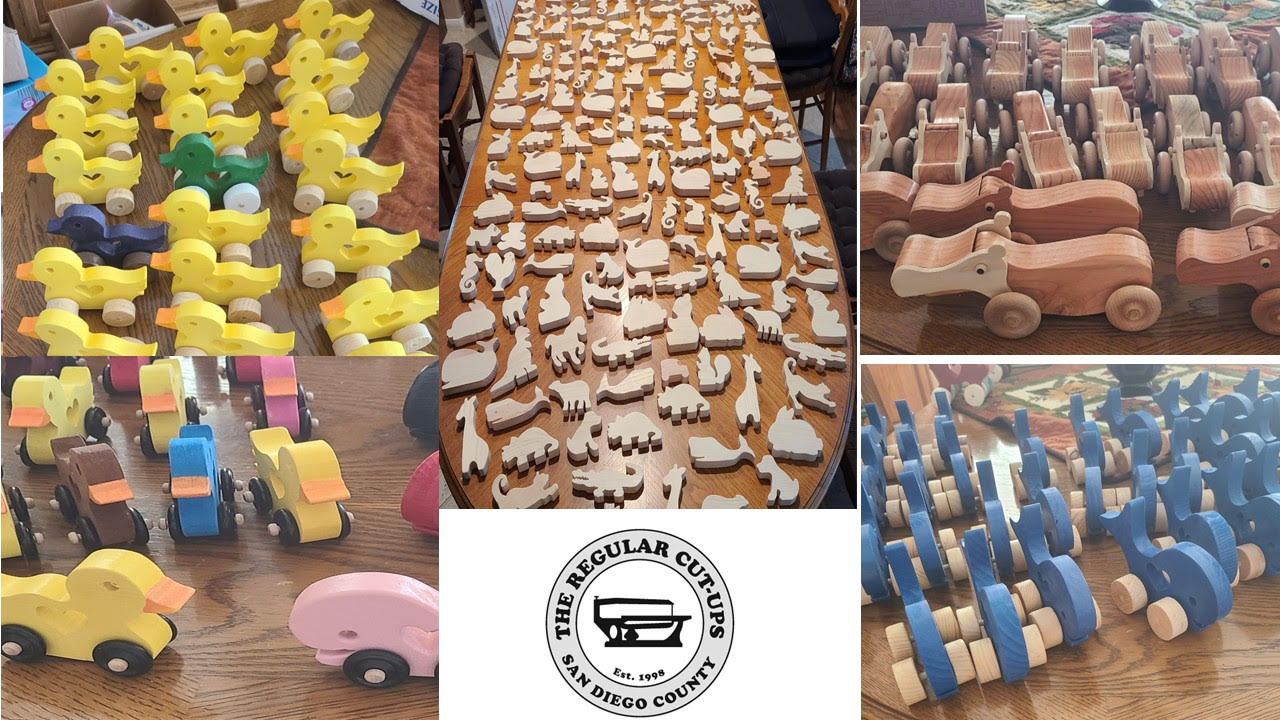 Be the first one to write a review
$5.00
US NO TAX, Part #: BWS-RegularCutUps
Checkout/Estimate Shipping

Our club, The Regular Cut-Ups, started in 1998 and are located in San Diego County.

Over the years, we have given away thousands of toys and puzzles to kids through charities like Ronald McDonald House, Operation Home front and local churches. In their Holiday 2011 edition, the SSW&C magazine ran an article about our giving toys to the families of US Marines serving at Camp Pendleton.

We also give away "cut-outs" (pine cut out in the shape of various animals like elephants, giraffes, dogs, cats. Dinosaurs, etc.) to parents and kids who visit our scroll saw demonstration booth at public events like the Design In Wood exhibit at the San Diego County Fair. We are almost entirely dependent on the individual financial donations we receive from folks who see us at public exhibitions like the San Diego County Fair.

The history of Jax Woodworkers Club, by Dr. Lorraine Haataia
​“I’m the last living founding member of Jax Woodworkers. All the others have passed away. I’ve been the
Chaplin for many years,” Bobby Clayton said.
Woodrow Connors with Bobby Clayton, two of the four original founders of Jax Woodworkers Club.
“My neighbor, Woodrow Connors, had a two-car detached garage in his back yard. That’s where he had
all his woodworking equipment. When we moved into the neighborhood, he had been living there
several years before us. This is where Woodrow founded the club. I’ve been there ever since the
beginning, since the inception.  Jax Woodworkers  formed with four men, including me. Carmen
Fenanelli was a banker and became the treasurer right away. And Ray Reynolds was the other guy. He
made a bunch of grandfather clocks and walking canes, plus many, many, many toys over the years.
We’re considered to be the founders. But Woodrow was the man, the head man. It started a long time
ago,” Bobby said.

Woodrow Connors with Ray Reynolds, two of the four founders of Jax Woodworkers Club.
“Woodrow was already making the crosses. They were designed to be hung in rear-view mirrors inside
cars. He brought the idea from the North Jacksonville Baptist Church. He was a member of that church
and that’s where he got the idea. He started making crosses in his garage. Each one is made of
hardwood. They all have red yarn and a heart that holds the yarn together. His wife, Miriam, used to
string the red yarn through the crosses and add the plastic hearts. The crosses were free and not to be
sold. He just gave them away. Woodrow made more than 20,000 crosses and today they’re probably all
over the world,” Bobby said.

Be the first one to write a review

Check out some of our best-sellers!